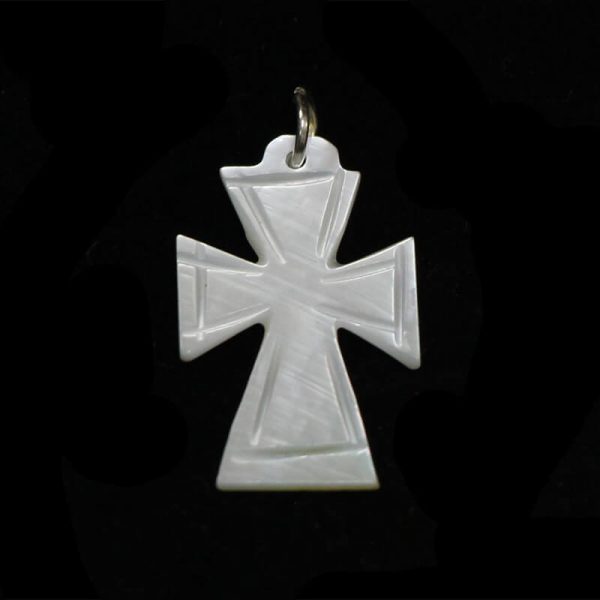 This beautiful pendant is handcrafted by Bethlehem’s local artisans according to the age-old Palestinian tradition of carving Mother of Pearl.

This pendant comes with a basic silver plated chain of 17.5″ or 44cm

For the size and more information on this pendant, please click on description or additional information below.

The triangular shape of the bars of this cross are like arrows, pointing to the heart, where the story of the cross takes root.

The cross is the ultimate symbol of Christian faith, communicating the sacrificial love of God. The cross Jesus died on was an instrument of torture used by the Roman Empire occupying the first-century Holy Land. According to the New Testament, Jesus’ death and resurrection made it possible for us to receive forgiveness of our sins and reconciliation with God (Romans 5:8). The cross is thus transformed into a symbol of life and love.

About this Traditional Palestinian Craft

The making of jewellery and decorative items from Mother of Pearl is perhaps Bethlehem’s oldest and most established industry. The practice supposedly came to Bethlehem in the 15th century with the arrival of Franciscan friars. Locals soon mastered the art and made a modest living selling handmade items to the many pilgrims who streamed into Bethlehem. Traditionally, the sea shells and abalone were brought in from the Port of Aqaba on the Red Sea but now they are imported from Australia, California, New Zealand, and Brazil. Palestinian Christians, particularly the Zoughbi family in Bethlehem, have often received international recognition for their mastery of this art form. For more information about the history of Mother of Pearl Carving in Palestine, visit the 2007 publication of “This Week in Palestine”.

A Jerusalem Cross with Stand and Ornaments
$22

Shopping Cart
There are no products in the cart!
Subtotal
$0
Total
$0
Cart
Checkout
Continue Shopping
0